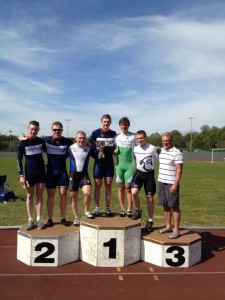 It was a nice change to be warming up in shorts after battling through the cold at the Good Friday Easter meet. Scunthorpe is a 450m tarmac track and we were welcomed by glorious sunshine for the 11 o’clock qualifying. There was a slight breeze down the back straight but with plenty of sprinters making the trip, the cut off time was fast for the top 12 qualifiers.

John Paul qualified first in a time of 11.25 followed by my time of 11.36 and Matt Rotherham in 11.36. There was a strong showing of Performance Cycle Coaching riders at this event with some good performances, Tom Baker (11.60, 4th), Tom Scammell (11.66, 5th), Jack Hoyle (11.95, 9th) and Paul Gittins who unfortunately missed out with only the top 12 riders progressing through to the sprint competition.

The first round went to seeding and so it was that the 4 Performance Cycle coaching riders made it to the quarter finals. I unfortunately drew Scammell and after a very late sprint, managed to keep the front to the line by about a length. After some tight races, Baker and Hoyle also found themselves in the 5th to 8th ride off, which they finished off in style with a 1,2,3 of Baker, Scammell, Hoyle.

In my quarter final, I came up against the 3rd seed, Rotherham. With the track being breezy and big, riders were very reluctant to take the front and attempt to lead out. This, coupled with the fact that at two laps of the track the race was over 900m long, made for some very long sprints (time wise) with riders rarely committing with more than 200m to go.

Despite my best efforts, I was forced to take the race from the front and so tried to stall, never really reacting to Rotherham moving about the track. The sprint started late and so I was able to hang on down the long home straight to the finish line.

The final was with Paul. He lead this time and again tried to keep the pace slow. I made my move just coming into the back straight, slightly earlier than he expected, and by getting to the front that late in the race I was able to stay there, despite Paul coming back strong down that long home straight.

It was the first win for me in Performance Cycle Coaching colours and with my family making the trip to watch, made for a great days racing. As a team, we showed a strong performance both in numbers and in the quality of our riders. I am looking forward to the next event and if the weather and the racing goes as well for the rest of the season, we are in for a good debut year!