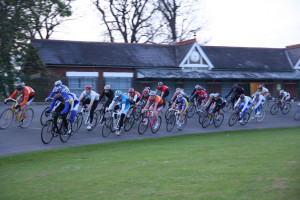 In 2002 I was 36 years old, living in Brighton and commuting to London every day to work as a lawyer. I also had two teenage step-daughters and a three year old son. Both my home commitments and my work were very demanding. I had competed to a reasonable standard at rugby, athletics and rowing in my youth but had not done any sport for many years. I suppose, at the back of my mind, I missed the buzz from competition but I didn’t have a clue as to what new sport I wished to try.

Whilst watching the 2002 Commonwealth Games I was fascinated by the cycling track sprinting. The combination of tactics and power intrigued me. I decided there and then that I wanted to become a track sprinter, having no knowledge or experience of the sport whatsoever! I bought myself a road bike and started doing a little training but I didn’t have any idea as to how this was going to develop into competitive sprinting. I mentioned my desire to a friend and, by chance, he knew of a local coach who he thought might be able to help. That coach was Lee Povey and it is incredible luck that I found myself approaching exactly the right person.

Lee tells the extremely funny story of how I first approached him much better than I can ever do justice. Suffice it to say he agreed to take me on a client and he made it clear that it would involve a lot of hard work and commitment. I remember going out for the first few road rides and thought it must have been very frustrating for Lee, as my fitness levels were low and I didn’t really have any biking experience. However he was always patient and encouraging. Slowly my fitness improved and by May 2003 I was ready to have my first race at the local track, at Preston Park in Brighton. I still had much to learn, although my fitness was improving my understanding of sprint tactics was very elementary.

My first season was a bit of a shock, in that I was so far off the pace in the endurance events, however, Lee’s coaching and conditioning work meant that I became fairly competitive in sprint races within about six weeks of the start of the season. I loved the fierce nature and also the camaraderie of the racing, Lee’s enthusiasm and knowledge meant that my progress was apparent to all the riders. By the end of the season I felt like a proper bike rider and not someone faking it!

That winter we stepped up the training considerably with both weight training and turbo sessions in my freezing cold garage. In the space of one year my body fat levels had gone from about 18% to 9% and I was now feeling that I could compete properly at my local track meetings. This proved to be the case and in both the sprint and endurance races my performances increased dramatically over my first season. Lee’s twenty odd years of race experience meant that my understanding of the sport’s tactics also improved dramatically.

Lee’s pragmatic approach (I had to train around my work and family commitments), professionalism and selfless attitude meant that for the 2005 season…when approaching my 40th birthday…I was in the best shape I had been in my life. That season I was able to win several sprint events at the local league and then go to the National Masters with a genuine hope of being competitive in the sprint event. Unfortunately, I had a fall in my second race and damaged my shoulder and couldn’t finish the meet.

Recently work commitments have prevented me from racing but the progress I made during a three year period, under Lee’s guidance, was…in hindsight…remarkable. I went from being an overweight Dad, doing a sedentary job, with no bike experience, to a competitive track sprinter. My original target had been reached and exceeded.

All of my improvement is solely attributable to Lee’s passion, dedication and knowledge. I would recommend him as a coach to anyone who wants to improve their cycling in general and (in particular to aspiring sprinters both young and old!) who want to make significant and measurable improvements in both their physical and mental approach to cycling.