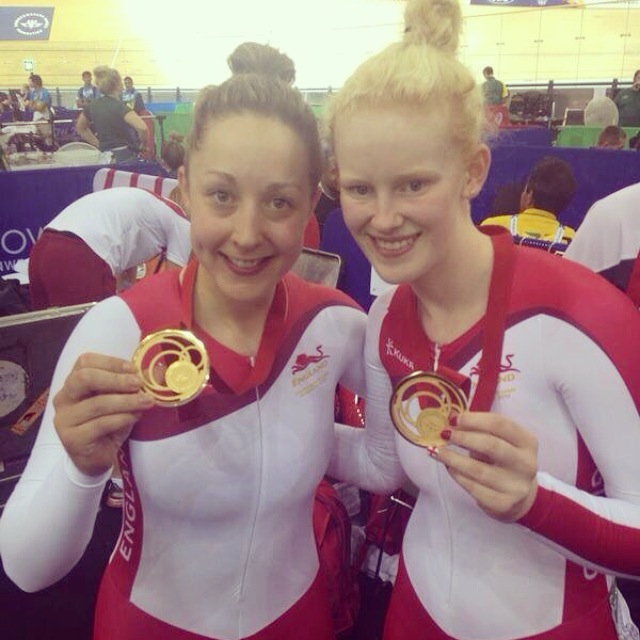 The 2014 Commonwealth Games in Glasgow was a particularly special one for Sophie Thornhill and I. We were the sole representation of Paracycling for Team England at the Games, not to mention being named as the favourites!
As we travelled up North on the team bus slightly under a week before our first event we felt a mixture of excitement and nerves.

By July it had been nearly a year since I had competed with my friend Sophie, and we were thrilled to have been paired up once again to compete against the best tandems in the World. The Commonwealth is home to world-class tandem riders, all who were about to bring their A Game to this competition. My first stoker, Aileen McGlynn, Paralympic Champion, would prove to be a great opponent throughout the Games.

Having already competed at a multi-sport event at the London 2012 Paralympic Games, it was my job to teach Sophie the ropes of Village life. Along with our other England sprint teammates Jess Varnish, Vicky Williamson and Dani Khan, we had a lot of fun in the Village, but we couldn’t forget that we were there to do a job. These Games felt different to me than the last one. I had already soaked up Village life two years ago. Now all that was on my mind was racing my bike. I had never won an international gold medal before.

We spent hours and hours watching TV in our team living room, broken up only by sleep, short blasts of people watching in the food hall, and the occasional track session at the Sir Chris Hoy velodrome. The waiting soon ended when Thursday 24th July came along.
Our first event was the Tandem Sprint, and we kicked things off with a personal best time of 11.277, a really pleasing start. We then faced one of the two Australian tandems that were competing at the Games in the semi-finals. I must say I felt a little rusty moving the tandem around the track at first. Glasgow is not an easy track to match sprint on, and on a tandem twice as long as a solo bike it felt very tricky! After a shaky start, Sophie and I found ourselves safely into the ride off for Gold and Silver, winning 2:0 in our semi final.

Who else would we be up against than the Scottish pairing of Aileen McGlynn and Louise Haston!? The home team and crowd favourites! We raced hard. Both rides were fast paced from the whistle, and the Scottish pairing rode fantastically to make the racing not only tough for us, but also a great spectacle. We won our first ride. One more to go….The final ride is a blur to me now, but one thing I will not forget is the race-winning move, just as we entered the back straight, underneath the Scots. I was looking for a gap for a few laps up to that point, and when it opened up to me finally, I threw Sophie and myself towards it. As the bell rang we put our heads down and pedaled as hard as our tired legs could carry us! We crossed the line clearly ahead, but it took me about half a lap to realise the fact that we were Commonwealth Champions. Have we won? How do you celebrate a win? I had never had this feeling before! Whooping and pointing at our family, we were over the moon! One event down, one to go.

And what a feeling to wake up to on your birthday! I turned 24 the day after my first everinternational gold medal. Wow. Sophie and I met with friends and family for lunch that day, and I brought back into the Village with me a big bag of presents. A wild birthday filled with smoothies and chocolate cake that our team carer bought for me. Still though, the big one was up next.

Sophie and I spent the next two agonisingly long days watching our team mates compete on the TV, not so patiently waiting for the 4 lap, ultimate test of speed endurance that was waiting for us on Sunday afternoon. When it came we were ready. Ready as in we knew it was going to happen and we knew it was going to hurt. Our warm up routine went well. It was warm in the Velodrome, which is good for fast times. As Sophie is World Champion in the 1km TT this meant that we would be up last in this event. With our headphones on we tried to avoid watching the screen and splits of our competitors, but you just can’t help it!

Finally our time came. A final last few words of “COME ON!” to each other and we were up on the start line, our tandem securely placed in the gate by our mechanics. Beep, beep, beep, beep, beep, bang and we were off. As with all kilos, this one was no different in the sense that it hurt, a lot, and all the way, but what I can say is that it was as close to a perfect ride as I have ever done on the front of the tandem. No pads hit, no wobble at the start, just all legs. In my 5 years of tandem racing I had finally done it. We crossed the line in a time of 1:08.1, a Games record, a sea-level World Record, and a massive 1 second personal best! We were double Commonwealth Champions!! Despite the lactic acid burning our legs, we took a fair few laps of honour and spent a short time at the side of the track once we were off the winning bike, hugging each other, our coach and our team, cheering and waving at the crowd. Why the hell not!What a day, what a Games, and to have done it with Sophie, a great friend of mine made it all the more special. We couldn’t believe how fast we had just ridden, but we certainly didn’t want to do it again any time soon! I know it sounds a bit of a cliché, but all of our hard work together had really paid off this time, and we had a fantastic team behind us at the Games who helped to make our experience and performances that little bit smoother. Two gold medals for England and two gold medals for ourselves. As with the Paralympics, I think the Commonwealth Games and the inclusion of the tandem racing really did capture the Nations imagination, and I hope that more elite competitions will feature not only the tandems but the other Paracycling disciplines too.