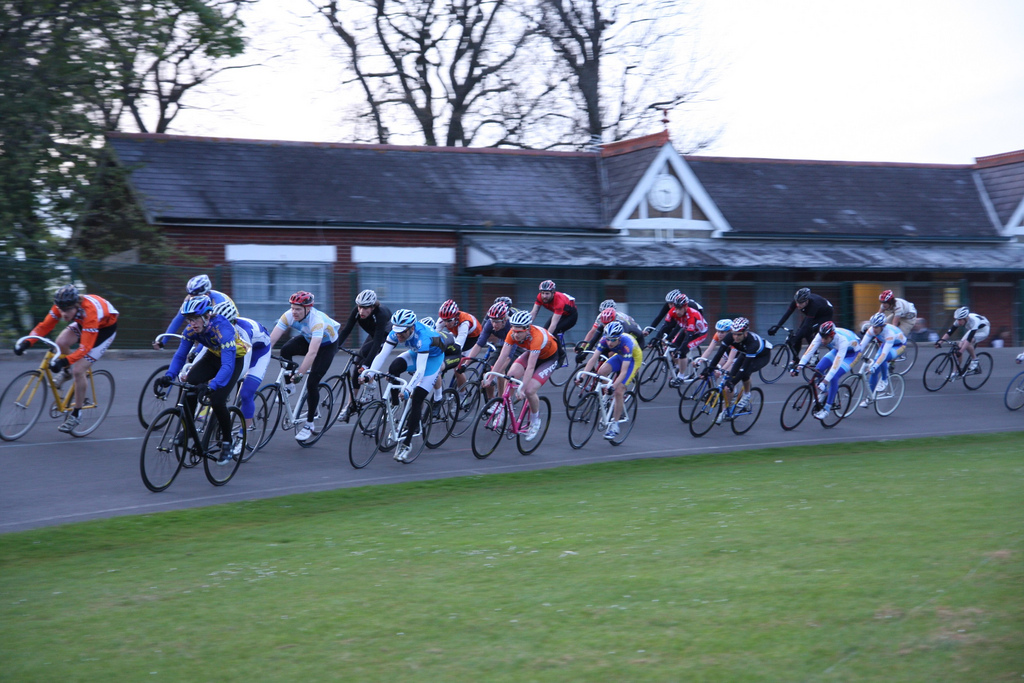 Riding smart starts even before the race does, line up as near to the front as you can, don’t place yourself at a disadvantage before the race even starts by being at the back from the start, this even more important on the bigger outdoor tracks which can have very large fields. The first sprint is usually very competitive, because you’re fresh you can do more damage to yourself than you realise and you’ll often find that the winner drops out later in the race – especially at local level races. So don’t contest the first sprint, just stay near the front following wheels.

Particularly on long outdoor tracks where taking a lap is difficult, consistency is often the key; score well in as many sprints as you can while making sure not to go too deep into the red, don’t get tempted to go all out to win a competitive sprint early on as this may well hurt your chances later in the race or even cause you to get dropped. Keep an eye on your opponents and mentally note the ones who also seem to be scoring well and be prepared to cover any attacks from them. Most points races and pretty much all longer ones are won in the second half of the race, your opponents will be more fatigued making winning points easier as the race goes on. Good points racers are patient, picking up the bulk of their points later in the race and/or waiting till the others have worn themselves out before launching that winning attack.

If you are struggling in the sprints through a lack of speed, make a move of your own and break away. A good time to do this is when another attack is caught, or when the bunch slows (often straight after a sprint). If you’re on a banked track, use the shape and height of the track to add to your jump – attack from high up the track as you exit a bend or dive down underneath the others as they swing up and slow down.

When breaking away you have a few choices; you can stay ahead, mopping up the sprint laps and/or lap the field to gain the points bonus or you might just stay out for one sprint then drop back to the bunch. The right option will depend on your own strength relative to the main field and whether you have got away alone or with other riders. Also don’t be afraid to attack again if you get caught.

If you lap the field as part of a group, make sure you keep track of your fellow escapees when you rejoin the field – partly to make sure they don’t sneak off again and partly because it will be in their interests to help you chase down other moves.

Remember that you don’t have to go hard when you get to the front of the bunch – it’s not the law – despite what some riders will tell you. Ride your own race and do what you need to do to win. When you do get to the front, soft tap through – saving your energy for sprints or better times to attack – and then swing up. Crucially, you must get back in to the top half of the group. Going right to the back often leaves you trapped behind weaker riders when the pace goes up or an attack goes off the front, causing you to have to work much harder just to get back up with where the race is happening. It’s all about conserving your energy for the most efficient times to attack or sprint.

Finally, always sprint hard for the last lap sprint as this can decide the places, with those who are tied on points being separated by their last lap finishing position – particularly important when the race forms part of an omnium competition and every place counts.

Bonus tips for more sprint orientated athletes; every time the bunch slows down and/or moves up the track take the opportunity to move up the bunch, this also makes it harder for riders to attack if you roll through to the front of the bunch on the black line as this will bring the others back down to you and make surprise attacks harder to do (they will have to go over the group rather than diving under). In the sprints just follow wheels and pick up 2-3-4 places, remember you might only have one or two big efforts in you and you have to stay sub maximal in the sprints or you won’t make the finish. If you go too deep it will be really hard to recover in the race.

These tips should be enough to get you started, make a note in your training diary after each race what went well and what didn’t work so you can use each race as a learning opportunity and look back on your notes in the future before important events.