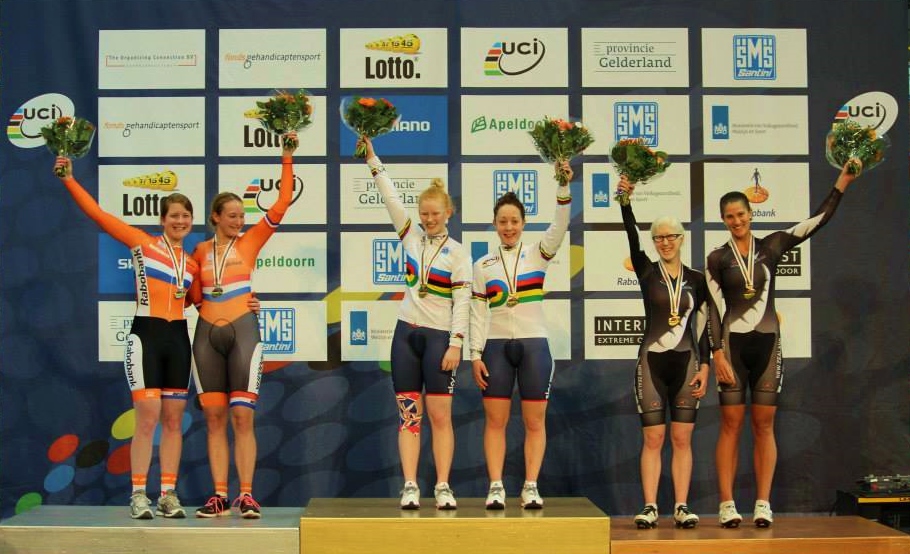 Being selected for my first Paracycling World Championships since before London 2012 was a huge achievement for me. Competition within the British team for the pilot’s spot on the tandem has never been stronger, and with that comes better and better performance levels. Making the team meant I was one step closer to winning that elusive rainbow jersey that I had never before pulled over my head.

We arrived in Apeldoorn, in the Netherlands just under a week before our 1km Time-Trial which was to be raced on Thursday 26th March. Sophie, (my partner during our successful 2014 Commonwealth Games campaign and defending double World Champion), and I arrived with mixed form. Sophie had been struggling with a knee injury for quite some time, but with the expertise of our amazing physiotherapist, Anouska, she was in a good place to race. My training had been going really well in the buildup to the championships and I felt in the form of my life.

The night before our big 1000m time-trial, I was as nervous as always, but quietly confident that if we put everything together on the day and got a clean gate start, we could do something special. Apeldoorn is a notoriously slow track, but the GB team were still turning in some excellent times during our few training sessions before the event. And so to the big day, all of my 1km time-trial races are a blur and this one is no different. I remember the first couple of revs out of the gate, to which the voice in my head said “oh no, was that good!? Go go go!!”, and I remember certain points of the race where I consciously compared them to how I’d felt at those points during the Commonwealth Games (amazing how calm you can be when racing at full bore sometimes!). With no idea how it had gone, the last half a lap was a pain that I don’t ever think I’ll forget. Everything turned into slow motion and I can remember thinking “come on, keep it together, where is that finish line!?” Your mind really does play tricks on you during this brutal, ultimate test of speed endurance. Crossing the finish line to see our time of 1:07.5, a sea level World Record and a massive 6 tenths faster than our Commonwealth Games effort. I couldn’t believe it. We were World Champions! I had won my first ever rainbow jersey. Words can’t express, even now, nearly a month later, this feeling. I can remember shouting “OH MY GOD!” as we entered the bend after we’d finished, and Sophie shouting back, “What did we do!?” When I called back the time to her, and as we approached the back straight, I could feel her lift her hands off her handle bars and raise her arms in the air, YES!

Our coach, mechanic and physio were all there to catch us when we stopped. We got off the bike, embraced as champions, teammates, and friends. We had done it together. Sophie was amazing on the day, as always. The saying goes that it doesn’t hurt as much when you win, but I can tell you that after a kilo this rule doesn’t apply! We spent the next 10 minutes or so lying on the floor in the pits of our GB team, smiling/grimacing up at our teammates. What made my first world championship win more special was that I got to share it with some more of my team mates. There was Sophie, of course, but also my good friends Pete, Dame Sarah, Jody and Neil. An amazing shot of us all standing in a line with our rainbow jerseys on really captures the beauty of our wins and how much they meant to us all.

Similar to the Commonwealth Games, we had two days in between the Kilometer and the Sprint competition, so this was filled with a little bit of training, and a lot of waiting around at the hotel. Myself and Sophie filling the gaps by resting as hard as possible whilst watching the TV show “Gossip Girl” (I heard a rumor this is one of coach Lee’s favourite shows.. ;). Sprint day was a strange day of racing for us, it seemed to fly by. Having qualified fastest in a personal best time of 11.1 seconds we had the “easiest” route through the rounds to the final, but not one team was ever underestimated. Sophie and I just had the legs on the others that day and we won our second title of the Championships after beating the Australian tandem 2:0 in the final.

Another competition down and my biggest win to date. I’m extremely happy with my own performances during the World Championships, but mostly I am happy with my preparation for them. Fail to prepare, prepare to fail. This is so important and after a short break, I am now focused on preparing for the biggest one of all next year, the 2016 Rio Paralympic Games.