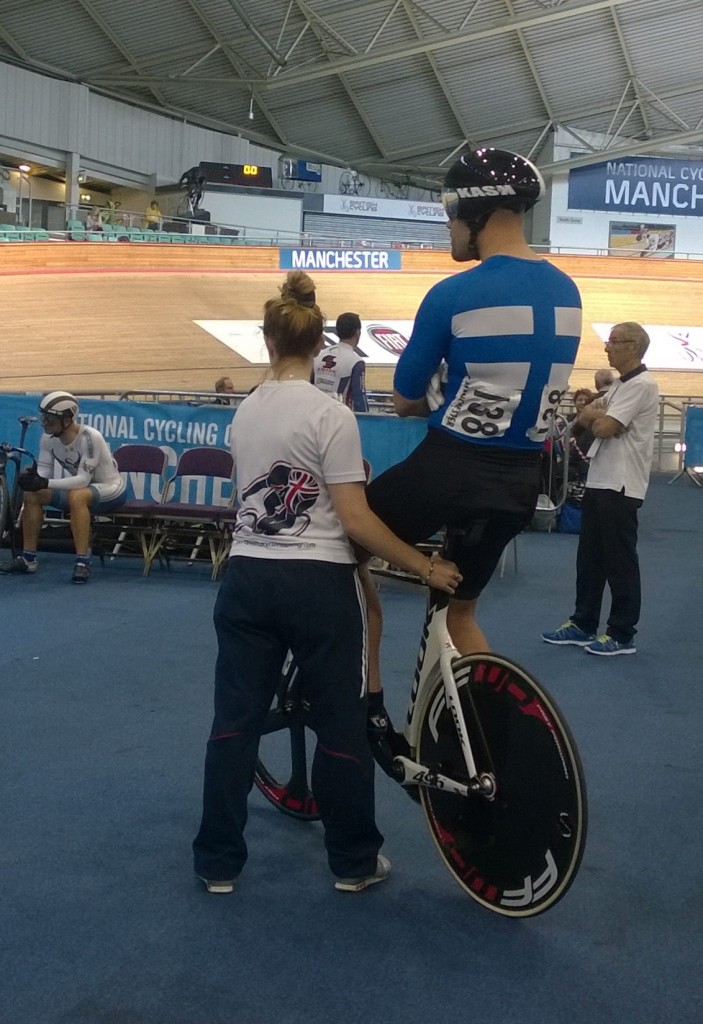 Cam Thomson: As a last year youth we stepped up his training and included strength and conditioning into his program. I believe that this has been a major factor towards his personal best times in every event this season. His technique and form in the gym is excellent, and his sensible approach to his progression has meant we’ve got the best out of him both on and off the bike. His hard work, commitment and passion is evident in his results this year: 2nd in his first omnium of the season which kicked things off to a great start.

Virginia’s goal for the season was to compete more, which we achieved in the form of sprinters leagues throughout the summer. She also came 15th in her first ever women’s crit race in Milton Keynes in August, which is a fantastic achievement and so deserved after all of her hard work.
Virginia’s work/training balance will always be a challenge for us, and we’re slowly finding a good set up. Virginia’s motivation and confidence has grown so much this year. We are now hitting over 170rpm on rev outs on the rollers, which is a huge improvement having struggled initially to sprint on the rollers. Myself and Virginia have some exciting plans in place for the winter months to improve further her bike handling skills and confidence!

Jaana and Tommi amaze me in the fact that they don’t have an indoor velodrome to train on, and yet are still achieving personal best times each year.
It has been a tough year for both of my riders due to increased work commitments, family commitments and bad Finnish weather! But as always they have been committed to the cause and have produced some really fantastic results.
Tommi achieved a PB of 11.6 for the flying 200m in gusty conditions at his Finnish National Masters Champs in August, winning the sprint competition that day. Adding to that he also became Kilo National Champion along with a bronze in the team sprint. In the Masters Track World Champs at the beginning of October Tommi achieved a massive 0.7 personal best time in the men’s 40-44 750m TT with a time of: 53.029.

Jaana has had a particularly impressive year, posting some exciting times on the few indoor track sessions that she’s been able to get to. Her hard work culminated in her best achievement yet, and also my best result as a coach, a fantastic silver medal in the women’s 35-39 500m TT at the Masters Track World Championships with a HUGE 1.4 second PB for a time of 37.6 seconds! She also got an indoor PB in the sprint qualifying with 12.4, which beats our goal of 12.5 for the year. Jaana was also National Finnish sprint champion, Silver in the team sprint and Bronze in the 500m TT

Nick Gill: 2015 has been an interesting year for Nick which saw him make the decision to switch from endurance to sprint. Nick has a fantastic turn of speed, and we’re just about to really get into the nitty gritty of track sprinting, with some strength and conditioning work his first new challenge. Nick’s flying 200m build up is getting better and better, and I’m excited about the times he’s going to post in 2016 after a solid winter as a sprinter. He can already ride a 12.87 with little to no sprint training. Nick achieved a big PB in his 1kmTT at an Omnium this year, posting a solid 1:12.90. Nick got 40th at the Youth National Road Champs: there were 100 entered! Nick also competed in the Assen Youth Tour at the end of July, and each day Nick’s positioning and performance improved. Other notable performances were track leagues at the Lee Valley Velodrome: Nick’s tactical awareness saw him achieve some really impressive performances, and his dedication to improve in this way was really excellent to witness.

Tom Easley: Tom has had a great year, stepping up again from last year, and posting some really encouraging results as he nears the Junior ranks. His 2014-2015 season saw him achieve 9th in the National CX champs, and 3 other national top 10’s in cx. Tom enjoyed several regional wins in MTB CX and road. He also got 2 top 10 MTB National placings, 2 top 20 results in the Road Nationals, and hit a PB of 20:35 in his 10 mile TT. An impressive CV over three disciplines!!

In general Tom has worked extremely hard to improve his race tactics and all round strength and fitness to match the demands of the harder racing. Great work Tom!