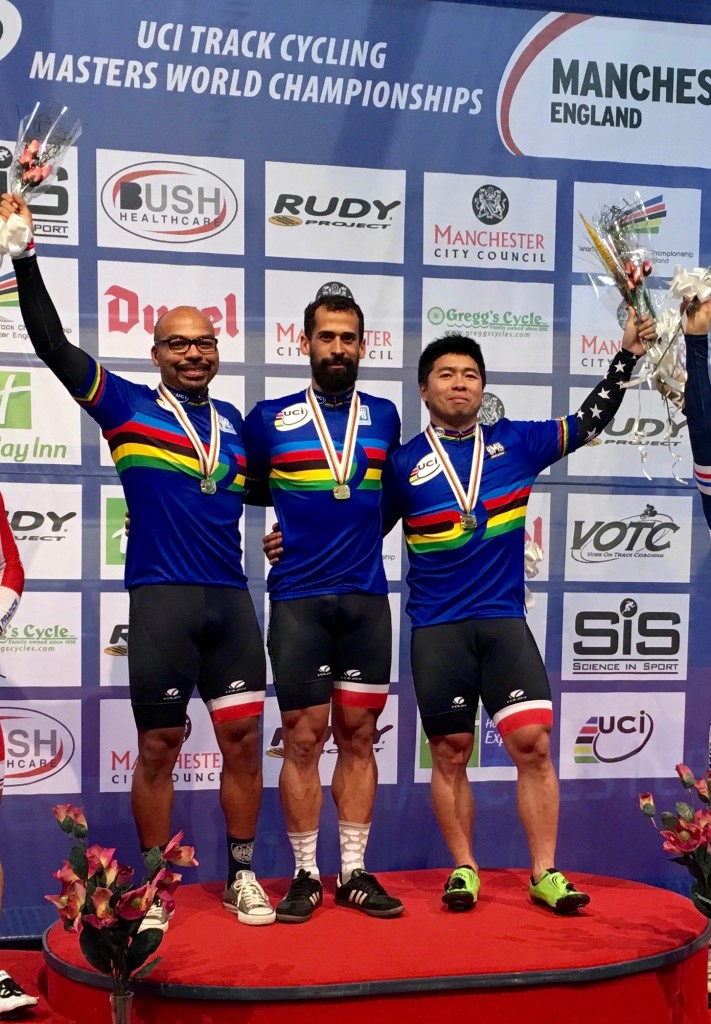 So finally got a moment to reflect on the Masters World Masters Track Cycling Championships in Manchester just over a week ago.

The week started a little slowly with Ethan Boyes doing a below par for him Kilo although still taking 4th place, Bruce Croall was a worthy winner though with a cracking 1:03.9 sea level ride. Reid Schwartz who I was helping out with race day coaching and his team mates James Kloss and Steve Troseth qualified comfortably fastest by 2 seconds for the 65 plus team sprint but were sadly relegated for an illegal change.

Day two started with a bang though! PCC athlete Monica Nevitt improved hey 2k time by 10 seconds from last years championships to set a massive PB and finish 6th, really looking forward to watching her progress as we get more time working together, star of our Hellyer Velodrome group for the day though was Laurel Green, who qualified 2nd in her 45-49 2k and although she put up an awesome fight and narrowed the gap in the final was beaten by worthy winner Jan Birkmyre. Great result for Laurel winning her 1st worlds medal.

Day three saw Monica and Laurel back with fellow USA competitor Francine Haas for the open women’s Team Pursuit, as a last minute decision this was the 1st time they had ever ridden together. With a positive team talk on technique and pacing the girls rode an excellent and impressively polished qualifier to put them 4th just 1.5 seconds off 3rd place meaning they would get to ride for the bronze that night. Despite a decent improvement of nearly 2 seconds they were beaten by the Aussie ladies who backed up their morning ride by improving nearly 3 seconds led by the impressively strong Jessica Laws. Still a great result for a team who had never ridden together before!

Day 3 also saw the start of the men’s 35-39 sprint with 3 Performance Cycle Coaching athletes, Ethan, Ken Lo and Bernard Cobb. Normal service was resumed after the disappointment of the kilo with Ethan Qualifying 1st, Ken 5th and Bernard 8th.

Some excellent tactical riding saw Bernard beat the 2nd seed and get through to the semi’s to join Ethan who had comfortably moved through the early rounds and for 5 minutes we had all 3 guys through to the semis when Ken beat the 2nd seed who had come back from the reps but was sadly relegated for a minor infringement, boo! Still great to see the boys all racing well in the early stages.

The next day Ethan won his semi comfortably to set up a much anticipated final against French rider Arnaud Dublé. For those of you who don’t know, Arnaud is a former French national team rider who actually held the world elite flying 500m record (and is still the French record) which has only been beaten by the current holder Sir Chris Hoy. Clearly a rider with an impressive resume!

After two close rides Lauri Art beat Bernard to take the bronze setting up the final showdown between Ethan and Arnaud, and what cracking races they were, probably the best of all the sprinting. Ride one, Ethan by 1/4 o a wheel, ride two Arnaud by even less in a photo! So a decider it was, Ethan and I looked at the video and discussed the tactics and jumping over Arnaud with just over a lap to go he seemed to have done enough, but showing his world level class Arnaud somehow came over Ethan to win the title in another 1/4 of a wheel victory. No complaints, Ethan rode superbly and was beaten by a worthy winner.

The next day was the highlight of the week for our camp, the men’s 35-44 team sprint, with the results from the previous days sprinting we need we had a strong chance in. With 3rd member of the nationals winning team Mark Andersen not present we had drafted in East Coaster Bernard to the squad and with the distance the guys had never ridden together before. Just to add to that I decided to change the planned order after the splits from the kilo and the 200m tt and put Bernard man 1 and Ken his first ever ride at man 2. The gamble worked with the guys doing a very polished ride to qualify 1st and set up a rematch for Ethan against French rider Arnaud. With another cracking ride in the final to win by almost a second the guys had earnt their 1st stripy jumpers! Team “It’s Raining Men” were the world champions!!

The rest of the week saw Monica miss out on a podium by one place in her scratch race for her highest ever finish at worlds with a 4th. Andrew Nevitt rode an attacking scratch and points race and was unlucky not to get a result in what was a very competitive 50-54 group. I was also looking after Helen Scott’s rider Jaana Hyvärinen who had a great championships with a massive PB in her 500m tt to win an impressive Silver medal and then qualifying 3rd in her sprint comp within a tenth of the fastest rider. Once she gets used to a 250m track she will be unstoppable!

As always great organisation by Martin Bridgewood, Trevor Reade and the rest of the team. It’s great catching up with all the friendly officials and volunteers, always doing their best to make sure the riders and helpers have a great championships. Thank you to all involved.