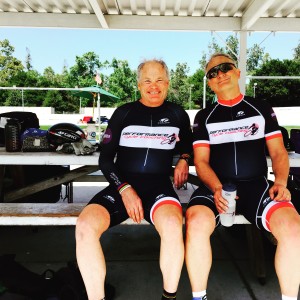 Knowing it was going to be a scorcher of a week in terms of weather, I flew in to Rock Hill, SC the day before racing started. My week of racing kicked off with the 500m TT, Points Race and Scratch Race, all of which I performed well in, considering the temperatures and my limited endurance training. The race I was most looking forward to and have spent the majority of my time preparing for, though, was the Match Sprints.

To qualify, I rode a 12.565s 200m TT, the fastest in my age category by over a half second. Having Lee present, as my holder, was calming and put me at ease since we’ve done this together many times before, in training and at races. I felt really good about my rides to get into the gold medal final against a known “endurance king” from Colorado. I knew he would want to take the lead and keep the pace fairly high, so I should lead out our sprints, especially being that this is the ideal tactic on a 250m velodrome. In our first ride I was able to sneak under him and take the inside line while he wasn’t paying attention, and then exercised patience when he caught me by surprise in our second ride, going with 2.5 laps remaining. Patience isn’t something that comes naturally to sprinters, but I have learned it is an important part of the sport, and by not overreacting, I was able to reel him in and over take him with half a lap to go.

The last day of Master’s Nationals was the team sprint and it was a great last event. My team was composed of my good friend and roommate for the week, Reid Schwartz, and our friend, Jim Kloss, who is the best in the world in the 75+ age category. Reid was man 1, Jim man 2, and as usual, I rode 3rd. We did a steady ride and won by 2 seconds which is a lot in a timed event that takes under 1 minute.

I first met Lee last year at the 2014 Master’s National Championship. Due to procrastination and poor planning on my part, I didn’t actually ask him to help me until after a clinic he and Andrew Harris put on this spring at the Giordana Velodrome in Rock Hill, SC. I asked him point blank if he could help me improve in time for the 2015 Master’s National Championships, to which he confidently replied, “Yes”. That weekend at the clinic, I rode a 1’14.4″ Kilo and a 12.8″ 200m TT.

Fast forward, a short seven weeks later to Nationals, at the same track in Rock Hill, I rode a 1’13.2″ Kilo and an 11.79″ 200m TT, a very exciting PR in both TT’s. More importantly, it was my highest placing in the 40-44 kilo final (6th place) and 200m qualifier (6th place) at Nationals. I also rode anchor for the Team Sprint, which we placed 5th in overall. I am very pleased with my week’s performances, and can definitely say that Lee’s training program came through for me.

In my third season with Lee Povey as my coach, I have beaten my 20 year old personal best in the flying 200m and finally won a Northern California Masters District Championship in the match sprint, both of which were our primary goals for this year.  In my best-of-three sprint final at Districts, I had the distinct feeling that I was applying every aspect of Lee’s Performance Cycle Coaching program; I felt completely prepared for every development in every race, all the way up to getting the win in the 3rd race with a bike throw at the line.

I’ve been truly impressed with Lee’s knowledge of the training and techniques of track sprinting, as well as his ability to share his years of experience in race tactics.  The training and racing for true track sprinting are almost completely different from the program Lee might prescribe for a road cyclist or track endurance specialist, and that knowledge of the differences was exactly what I was looking for.  One can easily find over 100 books about endurance training for cyclists, but I have not found even one with any depth about the practice of track sprinting, all the more reason I appreciate working with Lee. 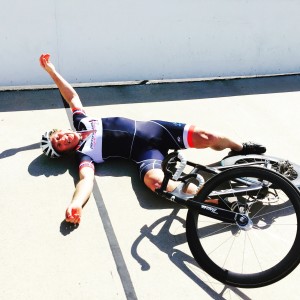 I started focusing on proper training for this season’s sprint events less than 6 months before the district championships, and just a few weeks after surgery for a previously broken collarbone.  I did already have general fitness from prior recreational road riding, a remote history of track racing over 25 years ago, and some unstructured general weight lifting.  However, I am beyond pleased with how much progress I made, and the National-level results achieved, in a relatively short time.  I attribute this progress largely to Lee Povey’s no-nonsense coaching approach with a consistent training dogma.  Like anyone else with athletic training history, I previously made my own training decisions based on outdated principles and unfocused priorities before I began working with Lee.  Furthermore, I am a physician with substantial training in physiology, such that I likely had more deeply-entrenched justifications of my prior training principles than most other athletes.  Lee quickly identified this intellectual baggage and exercised both patience and resolve in prescribing my training program and answering my questions based on what is known to work.  Furthermore, as a physician I make therapeutic decisions many times a day that are based on evidence-based research based on outcomes.  While the published research on athletic training and performance outcomes is limited and has fundamentally different structure than medical research, I still appreciate that Lee keeps up with relevant reading and applies outcome-based principles in his program.

Sprint race tactics were the ingredient I was lacking most when it came time for racing in June.  The other important element was rest, which is always in short supply for all of us working athletes (that is, all of us!).  I appreciated that Lee educated me through commentary on all my race performances from a tactical and behavioral point of view.  In both the NCNCA district events (elite and masters) I was fairly unrested, saving the taper for nationals.  I had ruined at least one prior national track championships in the distant past due to overtraining and lack of taper, so I was a bit anxious about tapering this year.  Following my PCC program, my taper seemed flawless and I feel that I entered the master’s nationals in my best possible physical form.   I am most pleased with my 2nd-seed 200 meter time, although my tactics were still wanting and will be a large part of next season’s training focus.  I dug extremely deep for the masters’ sprint event, and was simply not recovered two days later for the 500m TT.  However, I felt near my peak again the following day and was quite happy with my performance as Man-2 in the team sprint, which I heard was the fastest 2nd lap for TS in my age group.

Riding a bicycle has been an integral part of my life since I was very young.  I don’t just mean that I learned to ride a bike early, which I didn’t.  But since age 12 when I started in the early days of BMX (1972!), I have considered the bicycle to be an indispensable extension of myself.  Over the years I had a few periods of time when higher education and major life events have sidelined my bicycling, but my sense of identity as a cyclist has never left me.  The type of bicycle I ride and the risks I take on two wheels have changed over the years, but I still get more satisfaction from this athletic endeavor than anything else.  What competing on a track bike and training with Lee Povey means to me today is that I am truly investing in myself and exploring the most sophisticated application of myself to cycling.  I don’t know how long I will ride down this particular road, but I certainly am liking where it is taking me. 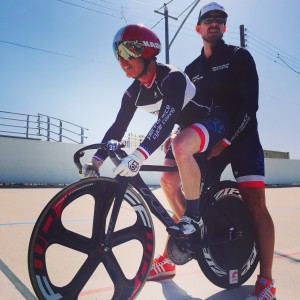 The 500m TT was my goal event for the 2015 season and I was less than thrilled to wake up and find how hot it was on the day as I don’t perform well under those conditions. Coach Lee was very helpful, and leading up to my event reminded me we should check my tire pressure and add some air if necessary. Upon inspecting my tires, we realized that I had a high pressure leak in my rear disc, and to make matters worse, at nearly that same moment, my hamstring muscle cramped up! To say that I was starting to freak out is an understatement!!

Feeling stressed, I wasn’t in any state to race my bike well, and especially not for my target event. Coach Lee sensing my heightened anxiety, quickly and calmly “talked me off the ledge” all whilst taking care of my mechanical, grabbing a teammate who had just finished their event and swapping rear discs to get my bike ready to race. Lee continued to guide me back to a positive, focused mentality, and as I became more relaxed, I even notice my cramp subsided and I was feeling ready to for my event. Lee walked my bike and me up to the line, made sure the holders had everything lined up properly, and then took a step back, ready to encourage me for my effort.

As the countdown began, my breathing naturally shifted to align with the tones and I settled right into the rhythm we had practiced so many times before. I nailed the start, exploding just as the timer hit zero, and I knew it from the moment I launched myself forward. All the way to the end of the 500m when I crossed the line, I was focused on holding the black line and always trying to accelerate, keeping the leg speed up and pushing through ‘til the end. I was delighted to hear the announced say my time, which was a new outdoor PB for me by about 2.4/tenths.

Of course, as I came past Lee after my effort, he echoed the time of my new PB, with a smile, that told me he was very tuned into my goal, and me having just achieved it.