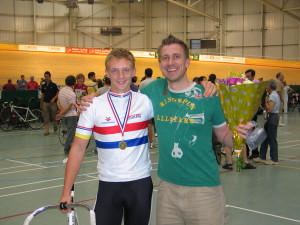 I started mountain biking when I was 13 with the local youth club and over the winter tried a few mountain bike races and had little success but I enjoyed it nonetheless. This progressed to track racing in the summer and for the first year, with little training, I enjoyed some success as an under 14 and decided that cycling was definitely becoming my main sport.

Over the next year I successfully managed to progress on to the British Cycling Talent Team and as my first Youth National Championships approached, I was approached by Lee and he suggested that I do some training sessions with him at the track in Brighton where we both raced. They went well and I found his feedback both encouraging as well as constructive.

The Youth National Championships were a relative success as I qualified for the points final and came 8th in the sprint. Soon after I was contacted by my then Talent Team coach and we decided that Lee should coach me for the following year until the nationals as a sprinter!! I thought that this was madness as I didn’t see myself as a sprinter but Lee seemed confident and it was convenient to have a training partner so local to me, so I thought I’d give it a go. Lee kept me motivated through the tough winter and I started the new season feeling fitter and stronger than ever before and at the beginning of 2006 Lee and I set three goals for myself.

The first two of these required a huge performance that was far beyond my expectations at the start the year; however I did it, clocking 11.429 and 34.9 respectively! To achieve these aims the training programme Lee set was specific and methodical. Lee explained to me the purpose of each session and how it would affect and improve my performance. Lee’s sound tactical knowledge, paired with invaluable video feedback, propelled me from success to success until I was crowned under 16 National Sprint Champion 2006. At both the 2006 and 2007 Championships we videoed each round of the sprint event and immediately did a post race video analysis so that I could apply lessons learnt in the next round.I was especially delighted to go on and win the sprint and I have no doubt that I would never have achieved these great times, breaking two national records in the process, without Lee’s constant support, guidance and encouragement throughout the year.

Shortly after I was selected for the sprint Olympic Development Program and so had to start with a new coach. Since then I have won both World and European medals at Junior level including a world title in the team sprint and I am hoping to turn professional over the next month.

I have no doubt that my success as a sprinter has been massively increased due to my coaching relationship with Lee, both because of his coaching philosophies and techniques and of course because he spotted the potential in me to become a sprinter of international standard.

Lee is still one of my closest friends and I see him frequently both socially and to train. As I have grown over the past 5 years, from the age of 13 to 18 and now soon to leave home, Lee has supported my cycling as well as me as a person and I will always be grateful to him and know that I can rely on his continued support and friendship in the future.

Pete is now a professional cyclist riding as a tandem pilot on the Great Britain paralympic team and is a double World Record holder for the Para tandem flying 200m TT and 1000m TT. He is a 4 time world champion with his riding partner Neil Fachie.